Driven by Music: Behind the scenes of Baby Driver with Ansel Elgort and Lily James

Baby Driver feels more like a collection of music videos than a feature film.

You’ll struggle to find a writer/director that uses a soundtrack as tactfully as Edgar Wright does in his latest. Much of the film is completely in time with its soundtrack, as the man behind Hot Fuzz and Scott Pilgrim vs. The World delivers entire scenes which are carefully choreographed, seamlessly weaving into and amongst each other. Clearly, music was just as important as cameras and microphones to the creation of Baby Driver.

“At my first meeting with Edgar, we just talked about music the whole time. I didn’t even know what Baby Driver was, I’d just met Edgar Wright, and for two hours, we talked about music,” says Ansel Elgort. He plays the lead role of Baby, a young getaway driver coerced into working for a powerful crime boss. He soundtracks much of his life, with different iPods for different days and moods, while also making music on the side.

Even in its infancy, it was clear that the film was going to be completely driven by music. We see this from the outset, as Baby Driver opens with a play-by-play of Wright’s primary idea for the film. He says that upon hearing The John Spencer Blues Explosion’s ‘Bellbottoms’ for the first time back in 1995, he couldn’t get the idea of a car chase out of his head. Sure enough, in the opening scene, we see a heist followed by a car chase – all set to the jagged, intense tune of ‘Bellbottoms’. 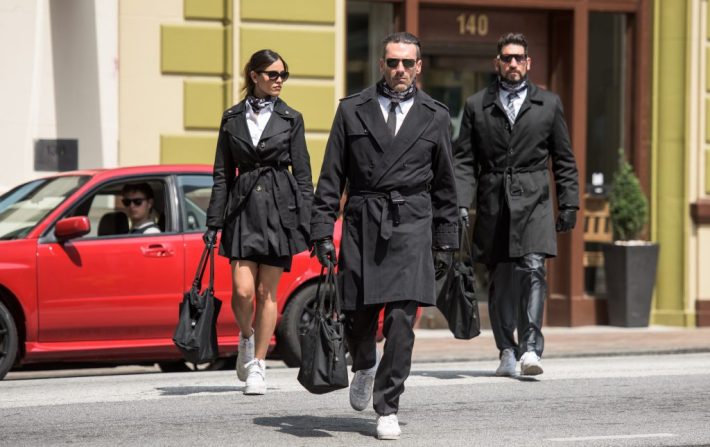 But what if the music wasn’t merely playing in the background? What if the driver reliedon it to time his getaways? Here, the idea of having a wheelman completely in tune with his music was born. The first iteration of this idea can be seen through one of Wright’s early credits – directing a music video for British electronic group Mint Royale’s ‘Blue Song’, way back in 2003. If only we knew what this music video, starring Noel Fielding and Nick Frost, would become.

Lily James also felt the effects of Wright’s musical influence. “We had our camera tests – so, before you start shooting, they tested our costumes and stuff – and he just put on some of the (film’s) tracks… we were just jiving as he was filming, so he really made the music feel so ingrained in everything.” James plays Debora, Baby’s love interest. They meet in the old-school American diner where she works, and they immediately bond over music, which fosters their relationship. On this point, she says there was no need for a “chemistry test. Sometimes you have chemistry tests with other actors – but we did have rehearsals for a while before… Edgar would get enthusiastic and work with us.”

The chemistry between the pair seemed completely natural, born directly out of Wright’s writing and direction. James continues, “I only exist really in the diner – but for Baby, you see this whole different side of him which sort of blossoms in Debbie’s presence. I think that does a lot of the acting for you.” 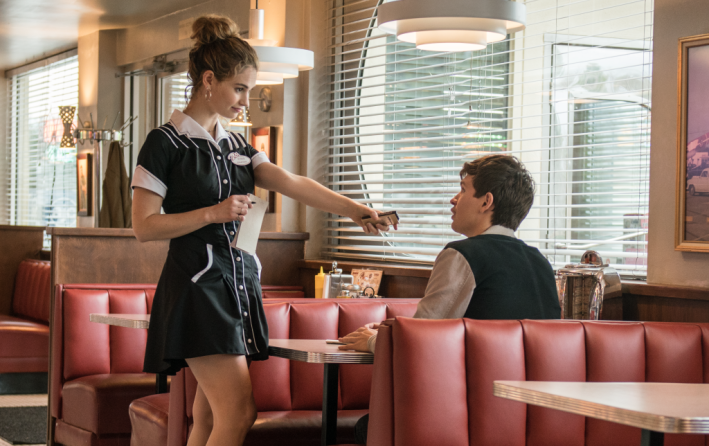 Debora (Lily James) and Baby in the diner. Photo by Wilson Webb, via Sony Pictures Entertainment.

The film’s choreography was done by Ryan Heffington, known for directing the music video for Sia’s ‘Chandelier’. Essentially, he was tasked with keeping everyone in time with Wright’s soundtrack. “I had my earphones on, so it was easy for me, but for Lily, and Eiza (González, plays ‘Darling’), and Jon (Hamm, plays ‘Buddy’) – they had earbuds in, so they could hear the music… almost everybody is moving to music, and feeling the music,” says Elgort.

While only a few of James’ scenes were choreographed, she feels it helped to further motivate the emotion expressed on-screen. “It encouraged a kind of freedom of expression, because you had this momentum.” There’s a point in the film where Baby and Debbie share a romantic dinner, and it’s soothing to see them move in time to The Detroit Emeralds’ ‘Baby Let Me Take You (In My Arms)’. Simple movements such as clinking wine glasses and calling for the bill are choreographed, with the camera reinforcing the scene’s pacing through a slow tracking shot around their table.

This momentum can also be seen through film’s undying groove and rhythm – so it’s no surprise that Wright sought to cast a slew of musicians. Elgort himself is also a singer, as well as a DJ, under the name Ansolo. In many ways, he saw Baby as a reflection of himself. “The fact that he’s making music in his house, by himself at night, I’ve spent so many nights – sleepless nights – making music… I totally relate to that.” In fact, I learnt he’s actually a fan of one of Melbourne’s most famous (or infamous, depending on your taste) DJs. “Back in 2014 (when) Melbourne Bounce was this big thing, there was this guy, Will Sparks… I was obsessed with dance music in high school.”

On screen, he’s joined by singer Eiza Gonález, singer and producer Jamie Foxx, Red Hot Chili Peppers’ bassist Flea, and singer-songwriter Sky Ferreira – just to name a few. The audience is even treated to cameos from Big Boi of Outkast, Killer Mike of Run The Jewels, and Jon Spencer himself (of ‘Bellbottoms’ fame). These casting choices even resulted in a few off-screen opportunities for Elgort, as he “did a studio session with Jamie and Flea one night after set – which was pretty freakin’ awesome.” 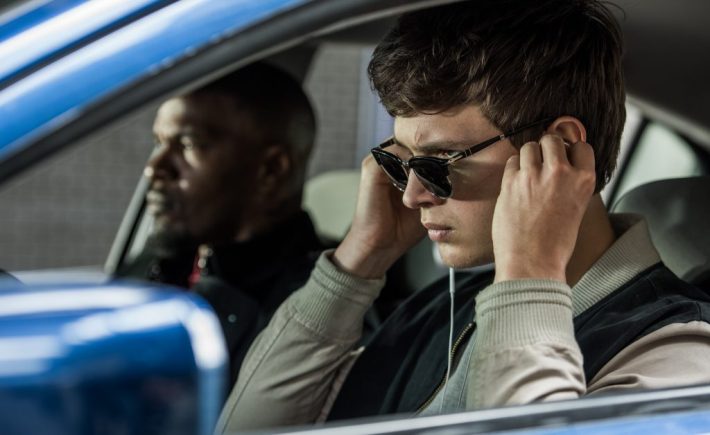 Baby plugging in his earphones while on a job with Bats (Jamie Foxx). Photo by Wilson Webb, via Sony Pictures Entertainment.

Speaking further about the musically saturated cast, he claims; “I think Edgar wanted to get a group of people together who were all very musical. I mean, Lily sings too. That’s why she’s drinking tea and honey, cause she’s gonna sing tonight.” To which James replied, “I’m doing a little cabaret act later, after the Q&A. A one-woman show of all the songs on Baby Driver.” They bounce off each other in the interview, much like they do on screen. (And they didn’t even need a chemistry test!)

Being a film that’s visually built on cars, crime, heists, and guns, it’d be easy to label Baby Driver as ‘high octane’ and ‘fast-paced’ – but it’d also be reductive. These all come secondary to the film’s extensive, varied soundtrack, made up of 29 songs straight out of Wright’s record collection. From The Commodores to The Damned, from Carla Thomasto Queen, everyone is sure to hear a track they’ll recognise.

Wright’s latest film ebbs and flows, from the frantic world of crime, to the homely world of Baby and Debbie’s relationship. The common thread through all of this, though, is music.

Baby Driver is in cinemas now. You can read our full interview here.

Journalist and producer based in Melbourne.
View all posts by anthonyfurci →